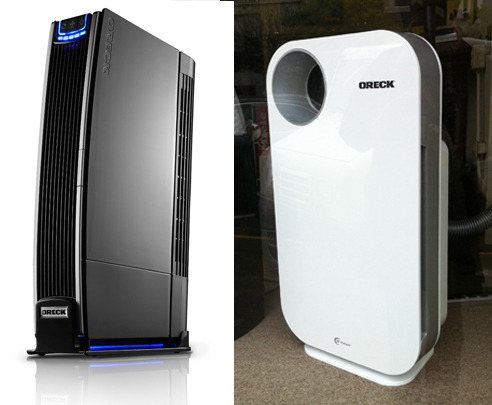 I passed by a vacuum cleaner store in my neighborhood a few weeks ago and was stopped cold by what initially appeared to be a 3-foot tall iPhone 4. However on second glance, I realized it was just an air purifier that was (apparently) designed to look like an iPhone. After snapping a photo I got curious about what the previous generation of Oreck air purifiers looked like. The black tower on the left (aka  “Oreck ProShield Air Purifier”) seems to have hit the market around January 2010, while the earliest mention I could find of the giant iPhone (aka “Oreck AirInstinct HEPA Air Purifier”) was January 2012. The iPhone 4 came out in the summer of 2010, which would have given Oreck 18 months to diligently apply the iPhone styling to their air filter. Indeed one of the blogger reviews I found of the giant iPhone–er, I mean Oreck AirInstinct HEPA Air Purifier–noted that if Apple made air purifiers, this is probably what it would look like, which I suspect is exactly the kind of comment Oreck was after.

Plenty has been said about the myriad of companies that copy everything about Apple products except their quality, so I’ll spare you that diatribe. I was just amused to find such a direct mimicry of the iPhone styling in an industry so far removed from mobile technology. It certainly gives a new meaning to “scaling up”.